In summer 2017, I was awarded a T. Anne Cleary Dissertation Research Fellowship to travel to the Bertrand Russell Archives at McMaster University. My dissertation focuses on Russell’s philosophy of logical atomism. So visiting the Archive was a real treat, and truly helpful in getting a more complete picture of Russell’s logical atomism. I am grateful to the University of Iowa Graduate College for their generous support of my first archival adventure! In this series of three posts, I will give an overview of my trip, talk about what it was like to work in the Russell Archives, and then discuss the historical data I found that aided my research. (This is Part 3. Part 1 is here. Part 2 is here.)

In this last installment, I will talk about what I found in the Archive that helped my research on logical atomism. These were mainly (1) unpublished materials that clarify what Russell’s logical atomism is, and (2) unpublished materials that clarify Russell’s evolving notions of a complex and of a fact. I only have space to discuss (1) here. I will save (2) for another post!

(1) Unpublished materials that clarify what Russell’s logical atomism is. First we need to set the stage a little bit. Russell’s logical atomism is widely-understood by scholars as the combination of two views, one in metaphysics and one in epistemology. The metaphysical view is that there are unanalyzable simples composing all other things. The epistemological view is that knowledge requires the analysis of ordinary objects into clearly-known and simple entities. There will then be a perfect match between statements in an ideal philosophical language and the structure of the facts described by those statements.

In my dissertation I argue that logical atomism, as advanced by Russell, is rather a logical view. A logical atomist claims that we need a powerful logic to solve––in some cases, to dissolve––philosophical problems: a higher-order logic, with all its ontological commitments and its non-tautologous theses, is required for studying philosophical problems––say, truth-maker theories, grounding, and composition of ordinary objects.

All well and good––except, where is the evidence for this claim? Well, I marshal the published texts in my dissertation! So read it when it finds a publisher. But my archival work last summer turned up some fascinating corroborating evidence for my thesis. 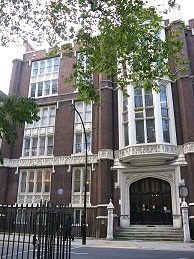 On its own, these pocket diaries are not so significant. But taken together with their context, his published writings, I think that they underscore the main thesis of my dissertation: these are logic lectures, not either acquaintance lectures or ontological-simples lectures. The unpublished materials that I found support the view that Russell’s logical atomism is a logical views: they support that Russell viewed his own logical atomism lectures as a work of logic. (In my view, the winter 1918 logical atomism lectures are even the companion to the fall 1917 lectures on the foundations of mathematics that became Introduction to Mathematical Philosophy. This is a more suggestive claim, but one that I hope to defend at a future Russell Society meeting!)

That is all for now. Tune in at a later date for a follow-up on Robert C. Marsh’s 1956 letters to Russell about the distinction between a fact and a complex in 1918! And many thanks again to the Graduate College at the University of Iowa for the T. Anne Cleary fellowship that made this discovery, and many others, possible!